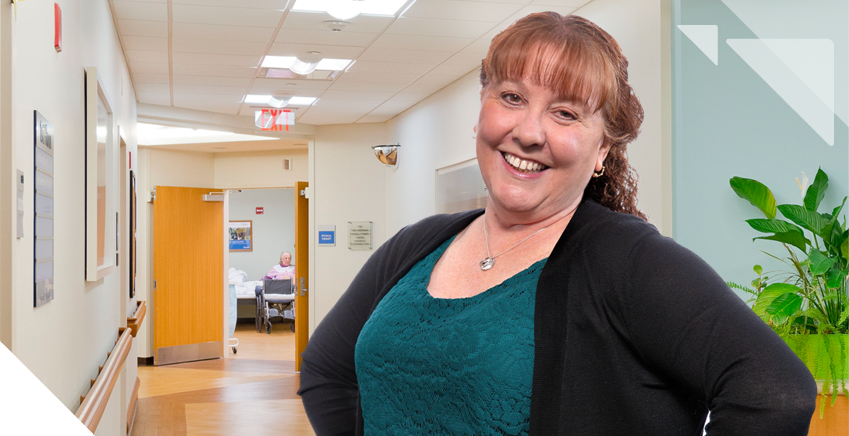 When Peconic Bay Medical Center (PBMC) opened the doors of its cardiac catheterization laboratory in October of 2017, Doreen Cooper, who has worked in the Billing Department at PBMC since 2007, told her husband, “If you ever have a heart attack, we’ll be able to take care of you right here in Riverhead,” since he had two stents put in at Southside Hospital just a few years prior. She was right about the place, but wrong about the person.

In mid-February of 2019, Doreen thought she was having a worse-than-usual episode of acid reflux. She was experiencing nausea and had broken out in a cold sweat.

“You need to take me to the ER,” she told her husband. They live in Aquebogue, about a five-minute drive from Peconic Bay Medical Center. But then she began feeling a constriction in her chest and it was becoming hard to breathe.

In moments, a team from the Riverhead Volunteer Ambulance Corps was whisking her to PBMC’s Emergency Department. Their preliminary assessment was that Doreen was, in fact, having a heart attack, and they alerted the hospital’s Emergency staff they were on the way.

“I work there,” Doreen remembers thinking. “I know those people. Everything will be alright.”

A short time later, in PBMC’s cardiac catheterization suite, the cardiologist, Dr. Persits, threaded a catheter through Doreen’s circulatory system and found a 95% blockage in the anterior branch of her left coronary artery, often known as the “widow-maker” artery. The procedure took about 20 minutes.

“There are no words to describe how different I felt afterward,” says Doreen. “The pressure and pain were gone. My color came back. Within an hour from when the episode started at home to when I was sitting up in the recovery room, I felt amazing!”

As a billing manager at PBMC, Doreen pays a lot of attention to how staff members interact with patients, because she knows that providing a sense of caring and compassionate personal attention helps the healing process. Even so, being on the receiving end of that kind of care was deeply moving.

“The care and everyone who delivered it were amazing,” says Doreen. “It was like being taken care of as part of a family. The cardiologists, Dr. Persits, and Dr. Katz, who followed-up with me afterward—they really cared and took the time to explain everything to me. The ED, cardiac and ICU staff were all so wonderful. They could tell when I was nervous and when to make me laugh. They knew just what to say to reassure me.”

A month after her STEMI heart attack, Doreen returned to work, feeling as well as she has in years, and grateful for the care she received. She is following up with cardiac rehab at the hospital and feels amazing.

“It has given me a greater appreciation for the care and dedication of the people I work with,” says Doreen. “We really are a big, caring family. And I want to include the Riverhead Volunteer Ambulance people in that, too. They were absolutely wonderful.”

A Milestone in Cardiac Care

“We are proud and grateful to have been able to bring this life-saving technology to the people we serve,” said Andrew Mitchell, president and CEO of Peconic Bay Medical Center. “Before we opened our Cath Lab, East End residents had to travel farther for advanced cardiac services than anyone else in the Tri-State area. Considering that heart ailments require quick diagnosis and treatment, this facility has quite literally been a life-saver. We are grateful for the support of so many generous members of the community who helped us fund this project. Their dreams and ours have truly become a reality.”

“Cath Labs” use a relatively non-invasive catheterization technique to diagnose heart ailments and perform interventional cardiology procedures such as stenting and balloon angioplasty, which are advanced-technology techniques designed to open blocked coronary arteries—the blood vessels that carry oxygen and vital nutrients to the heart. Blockages that last more than a few moments can result in heart attacks and death.

“Our team of cardiologists and cardiac-certified nurses and technicians has outperformed our expectations for delivering world-class patient care,” said Dr. Jean Cacciabaudo, PBMC’s Medical Director, who is also a prominent cardiologist. “We expected their performance of technically excellent cardiac care. We had not expected the overwhelming praise from our patients for the compassion, care, and communication quality they have experienced in their interactions with our staff.”

“We have also exceeded expectations in answering the volume of patient needs,” said Dr. Stanley Katz, PBMC’s Chair of Cardiology and one of the pioneers of interventional cardiology on Long Island. “Our original projections suggested a need for about 400 catheterization procedures per year. We’ve been experiencing double that rate, and fortunately we are well equipped to handle the volume.”

The Cath Lab is currently housed in one of the high-tech surgical suites of PBMC’s Kanas Center for Advanced Surgery. Next year, a second Cath Lab suite will be opened when the Kanas Regional Heart Center’s facilities are relocated to PBMC’s new Corey Critical Care Pavilion, which is nearing completion. The Tower will also house an expanded Emergency Department, Peconic Bay Medical Center’s Level III Trauma Center, and a rooftop helipad, to provide a new standard of emergency response capabilities for East End residents.