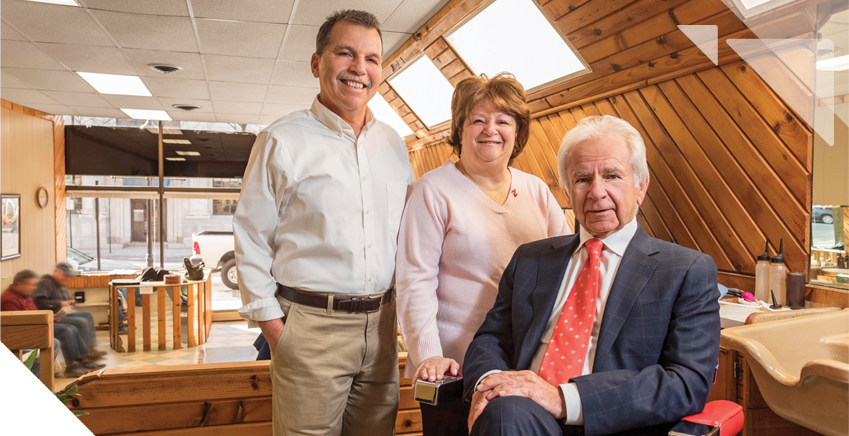 In November, Tony and his sister Josephine both visited the Cardiac Cath Lab at the Kanas Regional Heart Center.

Tony Balzano has been cutting hair at his Main Street Haircutters shop in Riverhead since 1971. His father opened the shop in 1960, and thanks to Tony and his brother, Andy, the business has been a fixture at 36 West Main Street in Riverhead for 58 years.

When Tony had an abnormal EKG reading while undergoing a stress test during a routine physical exam this Fall, his cardiologist referred Tony for a cardiac catheterization exam at the Kanas Regional Heart Center's new cath lab.

“I was one of the first patients at the Heart Center’s new cardiac cath lab.”

“Andy Mitchell helped me set up the appointment,” said Tony. “John Kanas had been talking a lot about the new heart center, so I knew about the cath lab.”

The catheterization exam involves threading a long thin tube called a catheter through an artery or vein in your groin, neck or arm to look for blockages, which can be caused by thickening of the arterial walls. If a blockage is found, the catheter is equipped to open the passageway through a process called balloon angioplasty and then keep the passageway open with a tube-like device called a stent.

“My exam came back clean,” said Tony. “There were no blockages. The EKG reading was a false positive. The exam only took a couple of hours, and I was very relieved to come out with a clean bill of health. I called John Kanas right away to thank him for helping to bring this life-saving resource to the community and to tell him how well I had been treated.”

Tony’s exam took place on November 6, 2017, and he happily told his family members about the experience. Less than two weeks later, Tony’s sister Josephine experienced chest pains at 3 a.m., and by 4:30 a.m., the pain and other symptoms were worse, so she asked her 90-year-old Mom to call for an ambulance.

The EMTs rushed her to the Peconic Bay Medical Center Emergency Department, where her symptoms were recognized as a heart attack and she was quickly taken to the Heart Center’s cardiac cath lab for an emergency catheterization procedure very similar to the one Tony went through for his exam.

This time, however, the interventional cardiologists found a severe blockage that was causing the heart attack. Using the catheter, they opened the blocked artery and inserted a stent, saving Josephine’s life.

A few days later, in a follow-up procedure, cardiologists at the cath lab inserted two more stents to relieve other blockages, and today Josephine is symptom-free, feeling fine, and grateful that the Kanas Regional Heart Center and the cath lab are part of the Peconic Bay Medical Center Main Campus in Riverhead, and part of the lives of all the residents on the East End.

“If they had to load me back into an ambulance and take me somewhere else, I don’t think I would have made it.”

“I don’t know what would have happened if the cardiac cath lab hadn’t been right here in Riverhead,” said Josephine. If the Kanas Regional Heart Center had not opened, the emergency department would have had to transport her more than 30 miles over crowded Long Island highways to the nearest interventional cardiology center to open the blocked artery, and Josephine may not have survived the journey.

“The EMTs, the staff at the hospital, and the cardiologists, Dr. Katz and Dr. Lederman, were all wonderful to me,” said Josephine. “They were so kind and considerate. They treated me like a queen.”

"We're so glad the Kanas Regional Heart Center is right here in Riverhead, and we don't have to be taken all the way to Stony Brook or Manhasset if there's a heart attack," said Tony. "To have a facility like this right here is unbelievable. We’re blessed."