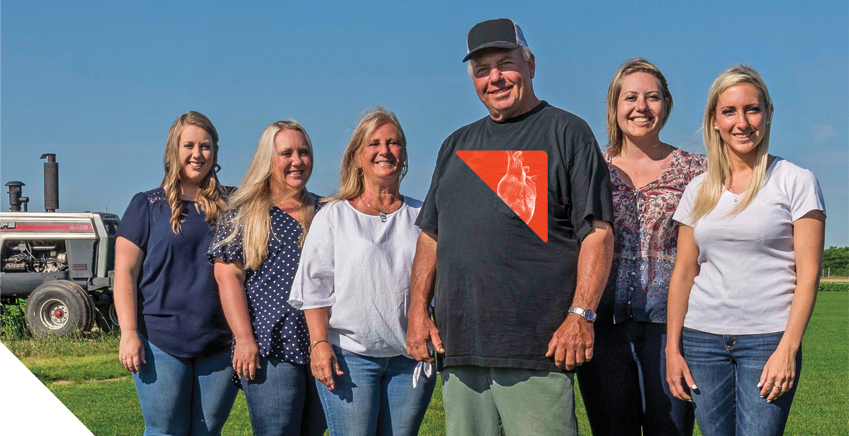 Jim Zilnicki's family has been farming on the East End for more than 100 years. Jim, aged 59, runs a 330-acre farm on Roanoke Avenue, Sound Avenue and Reeves Avenue in Riverhead, where he grows potatoes and wheat. But harvesting season in 2018 had been difficult.

“Even short walks were getting me tired and out of breath,” he said. “Then I started having chest pain. I knew something was up.” Jim knew it might be a heart problem.

Fifteen years ago, Jim’s arthritis had gotten so painful that he opted for hip replacement surgery through Peconic Bay Medical Center’s top-rated orthopedic joint replacement program. But the orthopedic pre-op exams identified a heart issue, so the surgeons at Peconic Bay Medical Center referred him for cardiac diagnostic testing at Long Island Jewish Medical Center (LIJ) in Manhasset, the nearest (at the time) reputable cardiac catheterization facility on Long Island.

Ironically, the cardiac catheterization program at LIJ was pioneered by Dr. Stanley Katz, who was instrumental in bringing a cardiac catheterization program to Peconic Bay Medical Center, where he serves as Chair of Interventional Cardiology. Today, LIJ and Peconic Bay Medical Center are fellow members of the Northwell Health system, New York State’s largest health system.

The cardiologists at LIJ diagnosed Jim with a partial blockage of a coronary artery. Using the minimally invasive catheterization process, they inserted a stent to relieve the blockage and keep the artery open. Shortly afterward, Jim had both hips replaced at Peconic Bay Medical Center.

“The hips are working great,” said Jim. “Fifteen years and I never had a problem with the hips or the heart until last November.” Always busy with the farm, Jim didn’t find time to visit his cardiologist until December, at which time the cardiologist recommended a diagnostic catheterization exam.

“Sounds like a good idea,” thought Jim. “When I have time.”

In January, it was time. With Jim dealing with shortness of breath and significant chest pain, his wife Janice decided it was time for Jim to go to Peconic Bay Medical Center’s Emergency Department.

Fortunately for Jim, Peconic Bay Medical Center’s catheterization program has been in operation since 2017. Jim was greeted by interventional cardiologist Dr. Andrew Persits, who explained how the procedure would unfold. Then the doctor asked a question that puzzled Jim.

“What kind of music do you like?” asked Dr. Persits.

“Led Zep,” said Jim, and to his surprise, the cardiac catherization procedure was accompanied by Jimmy Page guitar riffs, “A Whole Lotta Love,” and a medley of other Led Zeppelin classics.

“It seemed a little weird to be having a serious heart procedure while listening to rock’n’roll,” said Jim. “But the music really relaxed me. It was great.”

“We don’t do that here,” said Dr. Persits. “We’re going to send you to Southside, our sister hospital in Bay Shore.” Also part of the Northwell Health system, Southside is home to the Entenmann Family Cardiac Center and rated one of the nation’s top 50 hospitals for cardiac surgery by Healthgrades.

After another ambulance ride to Southside, Jim had triple-bypass surgery performed by Dr. Harold Fernandez, one of Long Island’s leading cardiac surgeons.

“The whole thing was smooth sailing,” said Jim. “Everybody knew what they were doing. They were so well coordinated. I felt at ease the whole time. Very professional, but very caring too.”

“The Cardiac Rehab Program is great,” said Jim. “The telemetry monitoring gives you great confidence while you’re working out. After open heart surgery, you worry about every little twinge, so it’s a big help to know you’re okay. At first, I didn’t want to do it and didn’t think I needed it, but I’m glad I did it. In the beginning, it was like the first week of football practice. I’d get tired and sore. But now, I can feel myself getting stronger every session. It keeps getting better and better.”

With his Cardiac Rehab program completed, Jim is back to work on the farm. “People think farming is all about planting and harvesting, but mostly it’s about fixing the equipment,” said Jim. “Real farmers spend as much time fixing tractors as riding around in them.”

His family members used to join in the farm work, staffing the family’s farm stand. “We used to sell a lot of pumpkins out of that farm stand,” said Jim. But today, in addition to farming, the family business is turning to health care. Jim’s wife, Janice, in addition to her role with the Riverhead Volunteer Ambulance Corp, is an administrative assistant in Peconic Bay Medical Center’s School of Radiologic Technology. Two of their daughters are nurses at Peconic Bay Medical Center. A third daughter graduated from the School of Radiologic Technology.

“I can’t say enough about the care I received,” said Jim. “Everyone I met at both hospitals was upbeat, friendly, and totally professional. From the doctors and nurses to the people sweeping the floor… everybody was comforting and caring and on my side.”