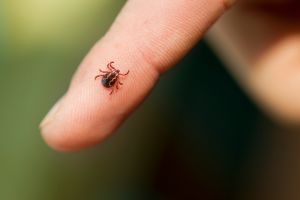 Tick bites are a common problem during the summer months when people spend more time outdoors and ticks are more active. These parasitic arachnids carry a host of diseases that can be passed to humans who are bitten.

Unfortunately, our region is a breeding ground for the types of ticks that carry Lyme disease and other serious illnesses.

At Peconic Bay Medical Center, our tick borne disease center stands ready to treat people who contract illnesses following tick bites. So if you develop a rash or other symptoms within a few weeks of getting a tick bite, contact us immediately. Treatment is most effective if it starts early.

But what are some of those illnesses? Read on to learn about some tick-borne diseases that are common to Long Island.

In the Northeast part of the United States, common tick-borne disease include:

Lyme disease: The bacteria that causes Lyme disease is spread by infected black-legged ticks. Symptoms can include fever, headache, fatigue and a red skin rash. Left untreated, the infection can spread to your joints, heart and nervous system.

Babesiosis: Transmitted by a microscopic parasite, babesiosis can affect anyone, but the elderly, population with comprised immune systems and people who have had their spleens removed are particularly at risk. Symptoms usually include fever, fatigue and anemia, and it may take eight weeks for symptoms to appear.

Tularemia: Tularemia is spread by a bacterium through tick and deer fly bites. Symptoms include high fevers and ulcers at the spot of the bite. Most tularemia infections are successfully treated with antibiotics.

Anaplasmosis: Also caused by a bacterium carried by black-legged ticks, anaplasmosis includes symptoms like headache, fever, chills, muscle pain, confusion, cough and nausea. Rashes are rare with this illness, and symptoms can take up to two weeks to appear.

Powassan encephalitis: Powassan encephalitis is caused by a virus that is often asymptomatic. The virus attacks the central nervous system and when symptoms do appear, they include fever, headache, vomiting, weakness, confusion, loss of coordination, speech difficulties and seizures. The incubation period (time from tick bite to onset of illness) ranges from about 1 week to 1 month