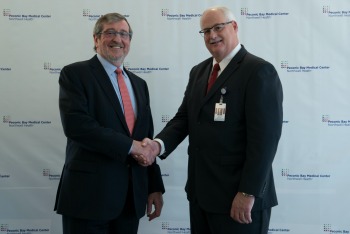 The agreement, signed by Northwell Health’s President and Chief Executive Officer, Michael Dowling and Peconic Bay Medical Center’s President and Chief Executive Officer, Andrew Mitchell was previously approved by PBMC’s Board of Directors and Northwell Health’s Board of Trustees. The ceremony began with the presentation of the flags and announcing the pledge of allegiance by Riverhead High School’s Navy Junior Reserve Officer Training Corps.

"Northwell Health is committed to investing in Peconic Bay Medical Center's future by strengthening and expanding its clinical services, and building a network of outpatient facilities that will establish Peconic Bay Medical Center as a regional destination for top-flight medical care," said Michael Dowling, president and CEO of Northwell Health. "By anchoring Northwell Health's Eastern Region, PBMC will significantly enhance the health system's ability to meet the current and future health needs of residents of central and eastern Long Island."

As the population on the East End has grown so has the need for growth in certain advanced medical services.  “In order to meet these public health needs, Peconic Bay Medical Center and Peconic Bay Medical Center, together with Northwell Health are poised at the beginning of a new era that will positively impact the access to health care services. Our plans include the first cardiac cath lab and the first trauma center for the East End. We also plan to have expanded maternity and child health services as well as additional locations for ambulatory and urgent care services,” Andrew Mitchell stated.

Together with Northwell Health, PBMC will expand services and grow as the East End community continues to evolve.

About Northwell Health: Northwell Health is New York State’s largest health care provider and private employer. With 21 hospitals and nearly 450 outpatient practices, we serve 8 million people in the metro New York and beyond. Our 61,000 employees work to change health care for the better. We’re making breakthroughs in medicine at the Feinstein Institute. We're training the next generation of medical professionals at the visionary Hofstra Northwell School of Medicine and the School of Graduate Nursing and Physician Assistant Studies. And we offer health insurance through CareConnect. For information on our services in more than 100 medical specialties, visit Northwell.edu.