Effective immediately, all visitation except when medically necessary (i.e. visitor is essential to the care of the patient) or for family members or legal representatives of patients in imminent end-of-life situations has been suspended. 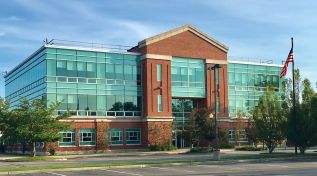 “We are delighted that People’s United Bank has selected PBMC for this major acquisition,” said Sherry Patterson, PBMC Board Chair, adding “it is incredibly fitting given the seventy-year synergy between Suffolk County National Bank and the medical center.” Andrew J. Mitchell, PBMC President and CEO added, “This former bank campus will allow the medical center to bring much needed new programs and jobs to the East End and continue to position Riverhead as the regional medical hub for Eastern Suffolk County.”

“This has been an exciting and eventful year for us,” said Emilie Roy Corey, Chair of the PBMC Foundation, which has been instrumental in providing community-based support for the medical center’s expansion. “First, we opened our new trauma center. We also just broke ground on the Kanas Regional Heart Center and new Corey Critical Care Pavilion. This new acquisition will help us continue the momentum and give us more room to grow.”

PBMC is purchasing the space from People’s United Bank, N.A., who acquired Suffolk County National Bank in 2017. “We take great pride in supporting our local communities,” said Howard Bluver, New York Market President, People’s United Bank. “We saw this as an opportunity to ensure the unused space is utilized for greater economic prosperity and wellness in Riverhead’s East End.”

“We are thrilled to see Peconic Bay Medical Center expand their operations. The eventual presence of many medical center staff, including anticipated new hires, will mean more business for our downtown merchants and tax revenue for the town,” said Riverhead Town Supervisor Sean Walter. “The growth of our community hospital into a world-class regional medical center is a boost for the entire region, and we are thrilled to see People’s United and PBMC strengthen their commitment to our community.”

The transaction is expected to close prior to year-end.

People's United Bank, N.A. is a subsidiary of People's United Financial, Inc. (NASDAQ: PBCT), a diversified financial services company with over $43 billion in assets. People’s United Bank, founded in 1842, is a premier, community-based, regional bank in the Northeast offering commercial and retail banking, as well as wealth management services through a network of over 400 retail locations in Connecticut, New York, Massachusetts, Vermont, New Hampshire and Maine.

Northwell Health is New York State’s largest health care provider and private employer, with 22 hospitals, over 550 outpatient facilities and nearly 15,000 affiliated physicians. We care for more than two million people annually in the New York metro area and beyond, thanks to philanthropic support from our communities. Our 62,000 employees – 15,000+ nurses and 3,900 employed doctors, including members of Northwell Health Physician Partners – are working to change health care for the better. We’re making breakthroughs in medicine at the Feinstein Institute. We're training the next generation of medical professionals at the visionary Hofstra Northwell School of Medicine and the School of Graduate Nursing and Physician Assistant Studies. And we offer health insurance through CareConnect. For information on our more than 100 medical specialties, visit Northwell.edu.