COVID-19 vaccine: We are currently offering vaccines to those in eligibility Phases 1a and 1b, as defined by NYS. Learn more 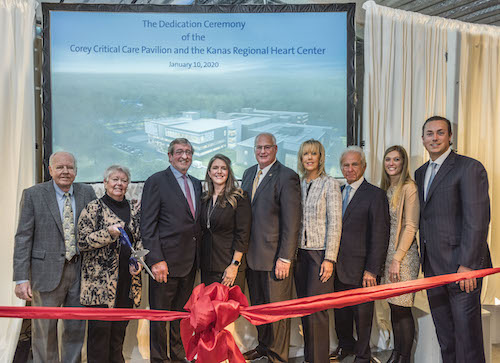 Completed after three years of construction, the Corey Critical Care Pavilion is named in honor of Emilie Roy and Michael Corey, and includes a rooftop helipad, and a 16-bed intensive and cardiac care unit. It is also the new, expanded home of the Kanas Regional Heart Center, which includes two cardiac catheterization laboratories, an electrophysiology suite and recovery rooms. The Kanas Regional Heart Center was made possible by the John and Elaine Kanas Family Foundation.

PBMC has been offering an expanded range of clinical services after joining Northwell Health in 2016, beginning with the hospital’s first cardiac cath lab in 2017. In the two years since its debut, PBMC’s cath lab has treated nearly 2,000 patients, including 85 with a severe form of a heart attack known as an ST-elevation myocardial infarction.

“We very much appreciate all our community members who supported our program and the Kanas Regional Heart Center, which will allow us to provide vitally important heart care for East End residents near where they live,” said Stanley Katz, MD, chair of cardiology at Peconic Bay Medical Center. “When you are dealing with someone’s heart, every second matters and having these high-quality resources and top-notch available to the East End has already proven to make a major impact on our community.”

For those patients who require a more complex level of cardiac care, PBMC collaborates with the renowned cardiothoracic team at Southside Heart & Lung in Bay Shore, utilizing Northwell’s SkyHealth helicopter to quickly transport patients after they have been stabilized in Riverhead.

East End residents also benefit from PBMC’s Emergency Department, which features a trauma center and stroke center recognized by both the American Heart and American Stroke Associations. PBMC is the only trauma and stroke center serving the North Fork.

Peconic Bay Medical Center recently expanded its ambulatory care network into Cutchogue and will be adding a Greenport location later this year.

In addition to the critical care and cardiology services being provided at the Corey Critical Care Pavilion, the building includes space to expand PBMC’s emergency department, which treated more than 38,000 patients in 2019.

“Having the space and ability to greatly expand our emergency department is another demonstration of Peconic Bay Medical Center’s commitment to providing life-saving care to our community members,” said Andrew Mitchell, Peconic’s president and chief executive officer. “We are constantly evaluating ways we can broaden our scope of high-quality services to residents and visitors of the East End.”

The generous donations from the Corey and Kanas families toward these two facilities were part of a 2015 capital campaign to raise $28 million. More than $33 million has been raised to date, including nearly $600,000 donated by the almost 1,000 Peconic Bay Medical Center employees.

“I am incredibly proud of the rapid growth Peconic Bay Medical Center has experienced since joining Northwell Health,” said Sherry Patterson, chair of PBMC’s board. “Generous donations such as these are critical to making this high-quality care possible and allowing it to continue. I would implore anyone who has the means, at whatever level they can, to donate to the hospital; it will ensure that we all have this critical care when we need it.”

About Northwell Health
Northwell Health is New York State’s largest health care provider and private employer, with 23 hospitals, about 750 outpatient facilities and more than 13,600 affiliated physicians. We care for over two million people annually in the New York metro area and beyond, thanks to philanthropic support from our communities. Our 70,000 employees – 16,000-plus nurses and 4,000 employed doctors, including members of Northwell Health Physician Partners – are working to change health care for the better. We’re making breakthroughs in medicine at the Feinstein Institutes for Medical Research. We're training the next generation of medical professionals at the visionary Donald and Barbara Zucker School of Medicine at Hofstra/Northwell and the Hofstra Northwell School of Graduate Nursing and Physician Assistant Studies. For information on our more than 100 medical specialties, visit Northwell.edu and follow us @NorthwellHealth on Facebook, Twitter, Instagram and LinkedIn